Differences Between Canada and the USA #3

I now have a better perspective on the differences between Canada and the USA. These variations are not dramatic, but they are interesting. In an effort to discourage anyone still reading this blog, I will write a series of posts about these contrasts.

Women hate cargo shorts on men.  In their view, these shorts with lots of useful pockets were out of style before the last ice age.  However, most men love them.

In the USA, men know that women hate cargo shorts so they only wear them when they are out with their buddies and try to stick to stylish versions accessorized with a nice shirt and sandals.

Canadian men love cargo shorts, especially when accessorized with dark colored socks and old dark colored walking shoes.  Most cargo shorts worn in Canada were bought before the last ice age and were last washed and pressed when Columbus discovered America.  It is important to stuff the pockets with anything that might be needed before winter sets in.  Cargo shorts are definitely OK to wear to the office almost any day except when your boss from the USA is visiting. 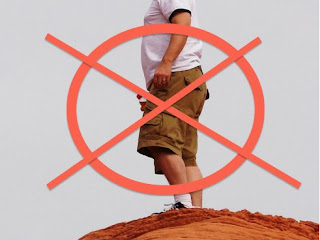 In the USA guns are considered almost an integral part of society, written in the constitution by God himself, and necessary for self defense, recreation, and keeping the government in line.  Gun owners would sooner give up their kids than lose the right to buy as many guns as they want whenever they want.  Smart Americans always assume that someone is armed and do not get into arguments with someone unless they are armed themselves.

Canadians view guns as useful for hunting or target shooting, but not much else. Canadians expect protection from the police, not by having a gun. The only places where you need a gun "to defend yourself" are places like Churchill Manitoba where polar bears regularly get into town.  Carrying a handgun outside the home is considered crazy and is a felony unless you have a rare permit from the police.  Canadians are not afraid of government tyranny as Canadian politicians are generally wimps and more interested in a good pension than raw power.
Posted by felix at 9:34 PM