How to Kill US Gerrymandering

One of the most objectionable and undemocratic characteristics of American government is legalized gerrymandering.  Gerrymandering is defined as "the dividing of a state, county, etc., into election districts so as to give one political party a majority in many districts while concentrating the voting strength of the other party into as few districts as possible."  Basically, the votes of the minority are devalued further by grouping them into districts that give them as little representation as possible.  One person's vote is worth less than another - NOT democracy.

I lived in a gerrymandered district in Virginia.  It was drawn up by the Republican state legislature to guarantee a Republican federal representative, and it has delivered this result for over 35 years, in spite of the fact that the area voted for Obama twice and Clinton in the last election.  You can see that it was drawn to guarantee a result by looking at the map, which is carefully drawn to ensure enough Republicans to elect a Republican federal representative.  The map does not follow logical geographic, municipal, or any other boundaries.

Many districts in many states are like this, and they favor the right or the left depending on who owns the state government.

How to defeat this undemocratic abomination?

Answer: vote in the primary of the party that always wins the district.  Since the district is guaranteed to go to a particular party, your only choice is in the primary election of that party. Do you want a more moderate representative or do you want the other party to choose a radical?  Of course you, the minority voter, want someone who is more moderate.  If you have to register as a supporter of the other party to vote in the primary, do so.  It costs nothing and does not bind you to vote for them in the general election.  Also, what is the point of voting in the primary for your party?  They are going to lose anyway.

So this is my idea to improve democracy in the USA.  After the last 15 years of turmoil, we certainly need it.
Posted by felix at 11:23 AM No comments: 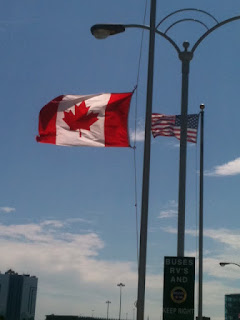 This is an update to my guide to moving to Canada, covered in this post.

One of the issues with moving is getting your investments moved from the USA to Canada.  Why would you bother?


So how do you make this transfer?  It does depend on the investments and the US brokerage or mutual fund company you used.

NB: If you are a US citizen, do not buy Canadian mutual funds or ETFs unless you are willing to submit a lot of paperwork to the US government.  These are considered PFICs (passive foreign investment company), which, for some unknown reason, the US government does not like.

Remember, you should talk to a competent financial planner before taking action.  This blog is just a single information source and a lot of information on the Internet is wrong, maybe including this blog, so do your research before taking a decision.

Photo credit: flickr
Posted by felix at 12:36 PM No comments: